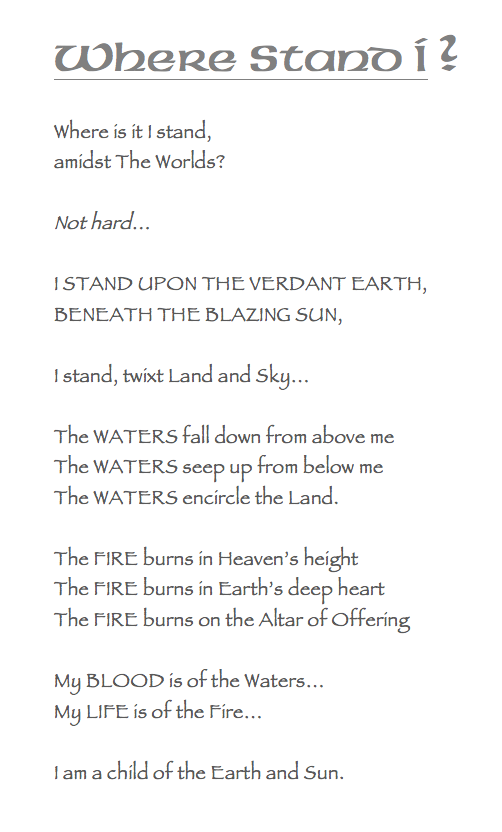 Per the ADF website, it is
“a basic meditation intended to link the Druid's spirit and flesh to the currents of Earth and Sky”.

In the (Ian crafted) ADF parlance, what are the images for these two powers?

1.)   The cool “magnetic waters”; below the Earth – The waters of chaotic potential (“Magnetic” needs to be seen strictly as a metaphor of course… )
2.)    A single star, high in the heavens above your head; blue white power comes down a ray from the star at your zenith

NOT all the way to the “center of the Earth” ?
“Cool” underground water is only found in the first several hundred feet below us. Deeper than that; below 1km deep, the the Earth’s temperature rises to levels intolerable for human life. We live on a very hot ball of rock with an exceedingly thin skin cool enough to sustain life.

Why is the Sun always left out of our Neopagan imagery?
I have already written a series of essays about this years ago and have presented the material as a workshop at a number of festivals. Now I do understand that there actually are a few of you out there who agree with me on this but I still insist that we are deeply in the minority when we choose to use the Sun as a representative of one of the two great poles of our cosmology... and again I must ask, "Why not the Sun?".

Female Earth vs. Solar Male…
Western mystical systems have been strongly influenced by Hermetic occult philosophy and Alchemy which were quite fond of characterizing the Male Principle as solar and the Female Principle as terrestrial (if not lunar). It works quite well for some folks  - - and leaves others deeply conflicted.

Such choices are up to the individual. The continuance of most life on Earth and the whole of human succession depend on the conjunction of binary pairings - but once the process has begun, yes, it is subject to CHANGE and proceeds in manifold forms.