What are you doing for EASTRE ? 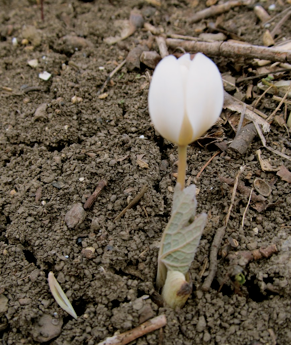 Have you been asked this year?

It seems so often that we're innocently approached by our coworkers or relatives not aware of our religious affiliations as if, as usual, everybody in the world is a good Christian, or at least one among those of the God-fearing Xmas n' Easter variety...

Just like
"YULE",
the word
"EASTER"
has
NOTHING
to do with
anything Christian anyway...

Yep, if we'd just give up on that ubiquitous non-historical "Ostara" spelling** (it's always sounded too californicosmic for my tastes anyway) and go with the flow and get adjusted to the very old and non-christian word "EASTER," we'd start getting our point across, A.) to ourselves, and B.) to the rest of them. Yep, if we spell it in the archaic form "Eastre" and use the common pronunciation or something very close, we could, just as we've all been doing with Yule, begin reclaiming its power as "one of ours-in-the-first-place!"


Yes, EASTER is not a Christian word...

Only Christians speaking English or German use the word "Easter" for the celebration of Christ's resurrection. ALL the other languages use some variant of "Pascha". For all we know, the Dark-Ages missionaries from the British-Isles christianized the continent and brought the custom of using the old pagan name for spring/dawn with them from England.

On a fixing a Neopagan THEME for the VERNAL EQUINOX

For over ten years now Sassafras Grove ADF has done a Vernal Equinox liturgical theme honoring the “Nerthus” Earth-Mother from the Celto-Germanic traditions of around 2000 years ago. The account we have of these traditions comes from the writings of Tacitus the Roman. Tacitus was writing about the people the Romans called “Germans”. In that time such distinctions were simply geographic territories, often defined by the Romans themselves. Whereas we have a notion of things “German” nowadays, many historians and archaeologists have come to agree that the cultural and linguistic distinctions were much less well defined then than they are now. Therefore they treat these territories as being essentially what they’d call “Late leTene-Celtic” or perhaps even “Celto-Germanic”. As Isaac Bonewits always said though, this is apparently the case with "most" modern scholars, "...except the German ones! "     ;-)....
------------------------------------------------
NERTHUS, the source text:
from Germania (ch.40) by TACITUS the Roman, around the year c.e.98:


" They have in common the worship of NERTHUS,
that is Mother Earth. They believe She is interested in
humanity’s affairs and drives about among them.
On an island in the Ocean sea there is a sacred grove
wherein waits a holy wagon covered by a drape. One
priest only is allowed to touch it. He can feel the presence
of the Goddess when She is there in Her sanctuary and
accompanies Her with great reverence as She is pulled
along by kine. It is a time of festive holiday-making in
whatever place She deigns to honour with Her advent
and stay. No one goes to war, no one takes up arms,
in fact every weapon is put away: only at that time are
peace and quiet known and prized until the Goddess,
having had enough of the people’s company, is at last
restored by the same priest to her temple. After which,
the wagon and the drape, and if you are like to believe
me, the deity Herself are bathed in a mysterious pool..." 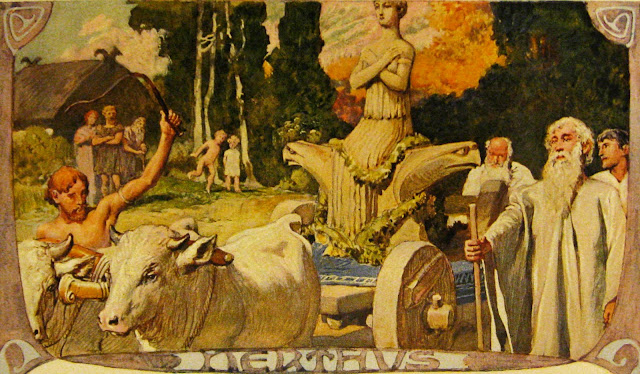 Particularly noteworthy for us is the fact that of the seven tribes named by Tacitus as sharing the Nerthus traditions, only three are recognizable to modern scholars(1.), and one of them is very familiar, the "Angli": that is, the "Angles", progenitors of the Anglo-Saxons to emerge hundreds of years later.
BURIED IN SEPTEMBER, UNEARTHED IN MARCH;
OUR LOCAL NERTHUS / EASTRE TRADITION

There are no actual historical connections that I am aware of for fixing the honoring the Earth, Magna Mater, Nerthus, Gaia, etc. at or around the time of the Vernal Equinox (She is with us all year-round of course...). In our work it has just seemed very sensible to do so and it has become our custom.

A rich expression of this current, unique to our group, is the tradition of burying our oaken Nerthus-idol every year in the ground of someone’s garden at the very moment of the Autumnal Equinox and then leaving her there until we unearth Her again six months later, at the very moment of the Vernal Equinox. Once dug up we carefully bathe her and anoint her with fragrant oils and, in keeping with Tacitus’ story, we then set her up in her little wagon and she goes “abroad among the people” throughout our community, visiting our various home shrines and traveling with us to visit other groves through the six months she spends “topside” every year.

Another yet still legitimately Northern / Central European based theme could be an equinox rite to EASTRE Herself (- Eostre, Ostre, etc.). It’s the same word as “Easter” and it’s at least as legitimate as the word "Yule" is for us to reclaim it as “one of ours”. It's very likely the word may have been used by the pre-Christians to mean springtide and has no linguistic connections to the terminology of Christianity whatsoever. As a goddess of beginnings, spring, the dawn, and-or the east, She can be called upon as a highly appropriate alternative to Nerthus as the deity-of-the-occasion, especially when scheduling calls for our public event to fall just before the actual equinox. The theme of the dawn-goddess Eastre's promise of Nerthus' immanent rising fits perfectly. Why, with the inescapable eggs, bunnies, crocuses, the works - - there’s no real stretch there, eh?

But was this "EASTRE" really worshiped as a goddess?

As to who Eastre "was", and even as to who may have worshipped her and when? Honestly, that stuff is very unclear. As a matter of fact, you’d be safe to trust no source that even mentions her as a "goddess" with any surety - She's that archaic. Other than one brief citation in Bede's de Temporum Ratione (8th Century), there are I believe no accounts in the ancient record by contemporaries referring to Her as an actual goddess being worshipped by their own people or others within memory. The roots of why She is generally counted by scholars as probably having been a deity are more linguistic than anything else. Eastre may have meant "the Beginning" (of life; i.e., the "dawn" thereof) yet we don’t know which came first: Eastre the goddess –or- Eastre, a word for "Springtide".
SO, the Christians fixed the Feast of the Passion and Resurrection from connections in their story with Passover. The Jews set the date of Passover from the first full moon after Vernal Equinox. Somewhere in the first 1000 years of Christianity the paschal theme became synonymous with this time of year - hence the Christians’ appropriation of the totally non-Christian word eastre from the Germanic tongues of which English is a member yet all of the non-Germanic languages of Europe have “pascha” as the root of their name for the feast of Christ’s resurrection with no sign of anything like “easter” at all.

Could the English actually have brought the designation "eastre" to the German Christians?

Some recent readings (Where had I seen this? It's out there; please help me source this!) have suggested that the reason for this is that in the "Dark Ages", while the earlier continental Christian missions had actually failed and their territories had largely lapsed back into paganism, it was a second wave of Anglo-Saxon Christian missionaries from Britain who finally established the ongoing foothold in Germany, using the far more successful strategies of the insular church. These Anglo-Saxon monks may have brought with them the custom of using the Anglos-Saxon term "Eastre" from their vernacular and it stuck.

FUZZY LOGIC solves the endless dispute over “when” a season begins or ends !
http://thebookofsassafras.blogspot.com/2013/05/fuzzy-logic-and-wheel-of-year.html

BREAK  A STICK in half at the sacred moment and nab some big Mojo? see:
http://thebookofsassafras.blogspot.com/2013/12/the-power-of-impending-moment.html


--------------------------------
* * "OSTARA"  - is a form found everywhere these days in Wiccan literature
but actually found nowhere in the ancient record. The word Ostara was first suggested in the 1840's by the Brothers Grimm as their speculation of how it -may- have been spelled in ancient Germany. Bede's citation (De Temporum Ratione, 730 C.E.) of the name Ostre or Eastre seem to be the oldest historical mention to be found, yet he nor any other historical source give the "ostara" spelling.
-------------------------
Professor RONALD HUTTON on Bede's references to Eastre:
"There remains, however, the problem of why the Germanic-speaking areas of Europe, in sharp contrast to the others, did not derive their name for this celebration from the Passover, but from a term which is rendered into modern German as Ostern and modern English as Easter. On the face of it, the issue ought to have been solved by Bede in the early eighth century, as part of his work on the calendar mentioned earlier.5 He declared that the name had derived from that of a goddess, Eostre, after whom the month in which Easter fell had been dubbed the ‘Eostur’-month. This passage has been so often quoted without any inspection or criticism that it is necessary to stress that it is subject to all the reservations lodged by Tille against Bede’s assertions concerning the ‘Mother Night’, cited in the section dealing with Christmas. It falls into that category of interpretations which Bede admitted to be his own, rather than generally agreed or proven fact. A number of German scholars cast doubt upon its utility during the nineteenth and early twentieth centuries, although not with sufficient evidence to disprove it in turn. Two facts do seem to emerge from the discussion. One is that versions of the name given by Bede were used widely among speakers of Germanic languages during or shortly after his time; thus the Christian festival was known as Ostarstuopha in the Main valley during the eighth and ninth centuries. The other is that the Anglo-Saxon eastre, signifying both the festival and the season of spring, is associated with a set of words in various Indo-European languages, signifying dawn and also goddesses who personifed that event, such as the Greek Eos, the Roman Aurora, and the Indian Ushas. It is therefore quite possible to argue that Bede’s Eostre was a Germanic dawn-deity who was venerated, appropriately, at this season of opening and new beginnings. It is equally valid, however, to suggest that the Anglo-Saxon ‘Estor-monath’ simply meant ‘the month of opening’ or ‘the month of beginnings’, and that Bede mistakenly connected it with a goddess who either never existed at all, or was never associated with a particular season but merely, like Eos and Aurora, with the dawn itself.6 With the removal of this shadowy deity from the canon of historical certainty, there evaporates any reliable evidence for a pre-Christian festival in the British Isles during the time which became March and April.7 It may be that there was none, the ancient inhabitants being wholly taken up with ploughing, sowing, and caring for young livestock. Alternatively, some of the later Easter rites and customs may echo practices which attended old feasts of which we have now lost sight. Of one thing alone it is possible to be confident; that, although the timing of the feast of the Resurrection was dictated by historical accident, it could not have fallen at a more appropriate point of the European calendar, when so much in nature conduced to a mood of celebration and renewal.
-----------------
Hutton, Ronald (1996). Stations of the Sun: A History of the Ritual Year in Britain (pp. 180-181). Oxford University Press.